For employers who hire both W-2 and 1099 contractor workers, it is essential that the criteria for a worker to be classified as a contractor are met. To meet those requirements, one has to actually understand the requirements… a task that the labyrinthine language of government entities does not make simple.

To read the complete EDD Information sheet you can download it by clicking the image below: 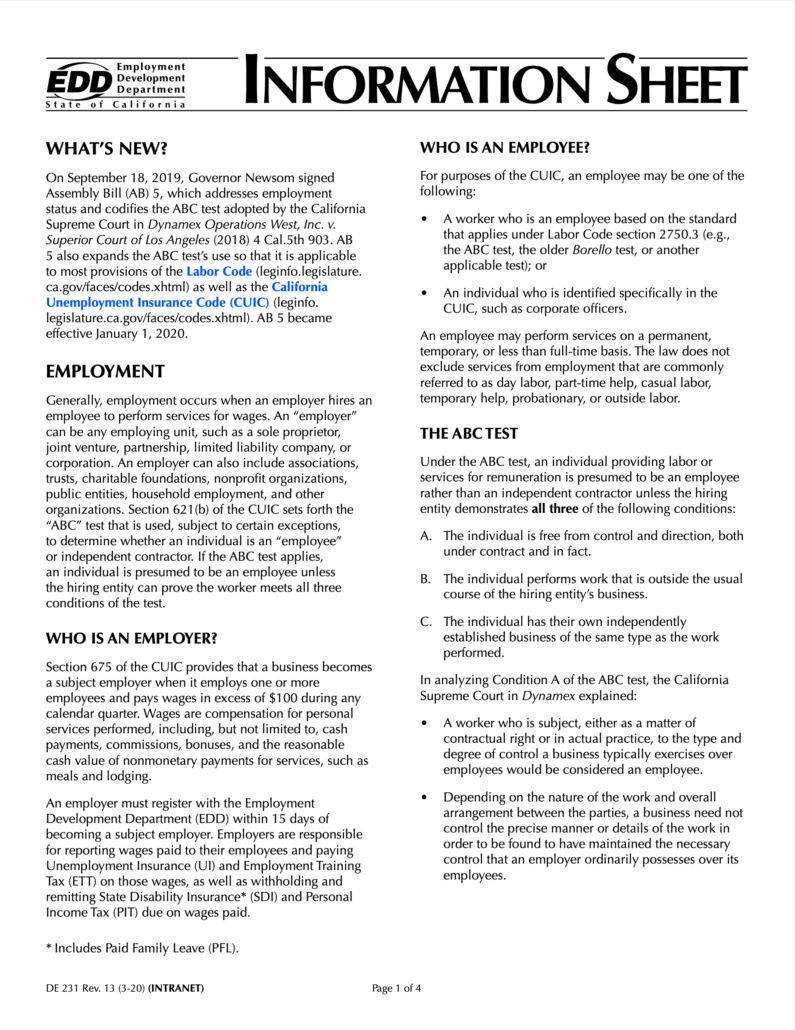 Here is the transcript of the attached PDF from EDD:

Generally, employment occurs when an employer hires an employee to perform services for wages. An “employer” can be any employing unit, such as a sole proprietor,

joint venture, partnership, limited liability company, or corporation. An employer can also include associations, trusts, charitable foundations, nonprofit organizations, public entities, household employment, and other organizations. Section 621(b) of the CUIC sets forth the “ABC” test that is used, subject to certain exceptions,

to determine whether an individual is an “employee” or independent contractor. If the ABC test applies,

an individual is presumed to be an employee unless the hiring entity can prove the worker meets all three conditions of the test.

WHO IS AN EMPLOYER?

Section 675 of the CUIC provides that a business becomes a subject employer when it employs one or more employees and pays wages in excess of $100 during any calendar quarter. Wages are compensation for personal services performed, including, but not limited to, cash payments, commissions, bonuses, and the reasonable cash value of nonmonetary payments for services, such as meals and lodging.

An employer must register with the Employment Development Department (EDD) within 15 days of becoming a subject employer. Employers are responsible for reporting wages paid to their employees and paying Unemployment Insurance (UI) and Employment Training Tax (ETT) on those wages, as well as withholding and remitting State Disability Insurance* (SDI) and Personal Income Tax (PIT) due on wages paid.

WHO IS AN EMPLOYEE?

For purposes of the CUIC, an employee may be one of the following:

An employee may perform services on a permanent, temporary, or less than full-time basis. The law does not exclude services from employment that are commonly referred to as day labor, part-time help, casual labor, temporary help, probationary, or outside labor.

Under the ABC test, an individual providing labor or services for remuneration is presumed to be an employee rather than an independent contractor unless the hiring entity demonstrates all three of the following conditions:

In analyzing Condition A of the ABC test, the California Supreme Court in Dynamex explained:

The California Supreme Court in Dynamex provided the following examples of Condition A being applied:

In analyzing Condition B of the ABC test, the California Supreme Court in Dynamex explained:

The California Supreme Court in Dynamex provided the following examples of Condition B being applied:

In analyzing Condition C of the ABC test, the California Supreme Court in Dynamex and subsequent appellate court decisions explained:

Examples of this include:

EXCEPTIONS: CIRCUMSTANCES WHERE THE ABC TEST IS NOT APPLICABLE

While the ABC test is the applicable test for most workers, for some jobs and industries Labor Code section 2750.3 applies the Borello multifactor test, which is explained below. For some occupations, the Borello test applies without further requirements (e.g., certain licensed professionals). However, for other occupations and industries, the Borello test applies instead of the ABC test only after the hiring entity satisfies other requirements

The exceptions from the ABC test may involve some rules and criteria that are not set forth here. Employers and workers should seek independent advice and counsel if they have questions about the applicability of any exception to their particular case. For additional information about and a full list of the ABC test exceptions, please visit the Employment Status Portal (labor.ca.gov/employmentstatus).

The California Supreme Court established the Borello test in S.G. Borello & Sons, Inc. v. Dept. of Industrial Relations (1989) 48 Cal.3d 341. The test uses multiple factors to determine whether a worker is an employee, including whether the potential employer has all necessary control over the manner and means of accomplishing the result desired. Such control may be indirect and need not be actually exercised or detailed. The control factor is not dispositive. In other words, a worker cannot be deemed an independent contractor based on a lack of control alone. Instead, this factor must be considered along with other factors, which include:

Under the Borello test, like with the ABC test, a worker is presumed to be an employee. The hiring entity has the burden of proving that an independent contractor relationship exists. But unlike the ABC test, no single factor under the Borello test determines whether a worker is an employee or an independent contractor. Rather, courts consider all potentially relevant factors, on a case- by-case basis, in light of the nature of the work and the arrangement between the parties.

WHO IS AN EMPLOYEE/EMPLOYER BY SPECIFIC STATUTE?

A worker not considered to be an employee under the ABC, Borello, or other applicable test may nevertheless be a statutory employee by law for purposes of UI, ETT, and SDI under circumstances that include, but are not limited to, the following:

returned to such person or a person designated by him or her. See Note below.

Note: For the statutory provisions listed to apply, the contract of hire must contemplate that substantially all the services are to be performed personally by the worker. In addition, an individual performing services in the three occupational categories listed would not be considered a statutory employee if the individual has a substantial investment in facilities used in connection with the performance of such services, other than facilities for transportation, or if the services are in the nature of a single transaction not part of a continuing relationship with the employing unit for which the services are performed.

SERVICES EXCLUDED BY STATUTE FROM EMPLOYMENT

Services of certain employees are specifically excluded by law from being subject to UI, ETT, and SDI. Examples of such employees include, but are not limited to, the following:

This exclusion can apply only to sole proprietorships and partnerships where the worker has one of the above referenced relationships with all partners. The wages paid to such workers are subject to PIT withholding and reportable as PIT wages.

The EDD is an equal opportunity employer/program. Auxiliary aids and services are available upon request to individuals with disabilities. Requests for services,