How Dynamex Ruined it for Everybody

Watch our full video below:

Who is Dynamex and what did they do?

Dynamex was a nationwide same-day delivery and courier service. They employed their California drivers as W-2 employees who received the benefits, payroll taxes, and perks of being a W-2 employee. Then in 2004, the company reclassified all of its California drivers into 1099 independent contractors to save employee costs.

With reclassified 1099 independent contractors, Dynamex avoided paying their portion of employee payroll taxes, medical benefit costs, or other employee benefits costs. It saved them money at the expense of their workforce.

After their reclassification, an employee filed a lawsuit against Dynamex for misclassifying him as an independent contractor and stripping him of his employee benefits. This lawsuit turned into a Supreme Court ruling that ultimately led to a completely new and stricter reclassification system than what was set in place before.

The California Division of Labor stated that the Dynamex case misclassifications alone cost the state $7 billion each year.

The Supreme Court ruling on the Dynamex Operations West, Inc. v. Superior Court on April 30, 2018 changed the regulations for employers to classify workers. Before the ruling, worker classification was based on the unclear 13 Factor Borello Test. As a result of the ruling, the court created the California Assembly Bill 5 (AB-5) that included the new and clearer ABC test for employers to correctly classify workers.

AB-5 was signed into law by California Governor, Gavin Newsom, in September of 2019 and went into effect January 1, 2020. This is not just another bill. The new AB-5 law directly affects the way Small Business Owners (SBOs) who hire Independent Contractors will operate in California. The law impacts ALL SBOs.

This new law redefines the way you as a business owner must classify your workers. It will now push California business owners to employ workers as W-2 employees and pay for benefits and protections (unemployment, overtime, sick leave, and worker’s compensation) that employees get under California Law.

As of January 2020, California Employment Development Department (EDD) places the burden of proof on business to show that workers are correctly classified as 1099 contractors and that they should not be reclassified as employees under the stricter criteria set out in the new law.

What is the ABC Test?

The ABC test is AB-5’s new guideline for how to properly classify workers. In order to classify a worker as a 1099 independent contractor instead of as a W-2 employee,  they must meet all three criteria.

What is the Borello Test?

Who Benefits from AB-5?

Beneficiaries of the stricter classifications are:

An example of a beneficiary of the new law might be 1099 workers for a large cleaning company who work fewer than 40 hours but only for one company, and do not have the benefits or protections of being an employee. These workers would, under the new law, be classified as employees and would be offered benefits, unemployment insurance and protection under the labor laws from being fired without just cause among many other W-2 wage-earning employee benefits.

Who is at a disadvantage with AB-5?

Companies who will find that AB-5 puts them at the biggest disadvantage in this new classification system are small to mid-sized business owners who want a flexible workforce by employing workers to help when times are good and then scale back either seasonally or due to market conditions.

These small business owners will have to pass a much stricter analysis in order to be able to hire 1099 workers as opposed to W-2 employees. The burden of proof lies with the employer to prove that a worker is correctly classified as a 1099 contractor. and EDD will request proof that 1099 contractors have a legitimate business starting in January 2020.

Another group that may find the new law puts them at a disadvantage is the independent contractor who prefers to remain a 1099 contractor. According to Forbes and Gallup, 36% of US workers are in the Gig Economy.

Retired people choose to pick up work, just like many recent grads and stay-at-home parents. For most of these workers, they don’t mind a 1099 contractor status and they do not want to be managed as a W-2 wage earner. For those workers, these new AB-5 classification rules are not offering any tangible benefits, they are creating impediments.

Surveys done by Intuit in 2016, found more than 90% of contract workers prefer the flexibility and personal control they have as independent contractors. They can accept or reject a job based on the amount offered, timing, or indeed any reason – these workers work only when they want.

What does this mean for Uber, Lyft, and other Rideshare programs?

Uber, Lyft, and HopSkipDrive drivers may have to choose one “employer” and thereby not be able to pick up as much work in a given period of time. The ramifications of this shift will certainly affect both companies and workers.

Thus, they remain eligible to work when and how they want, and for as many rideshare app companies as they wish. Learn more about why California overturned Prop 22 here. 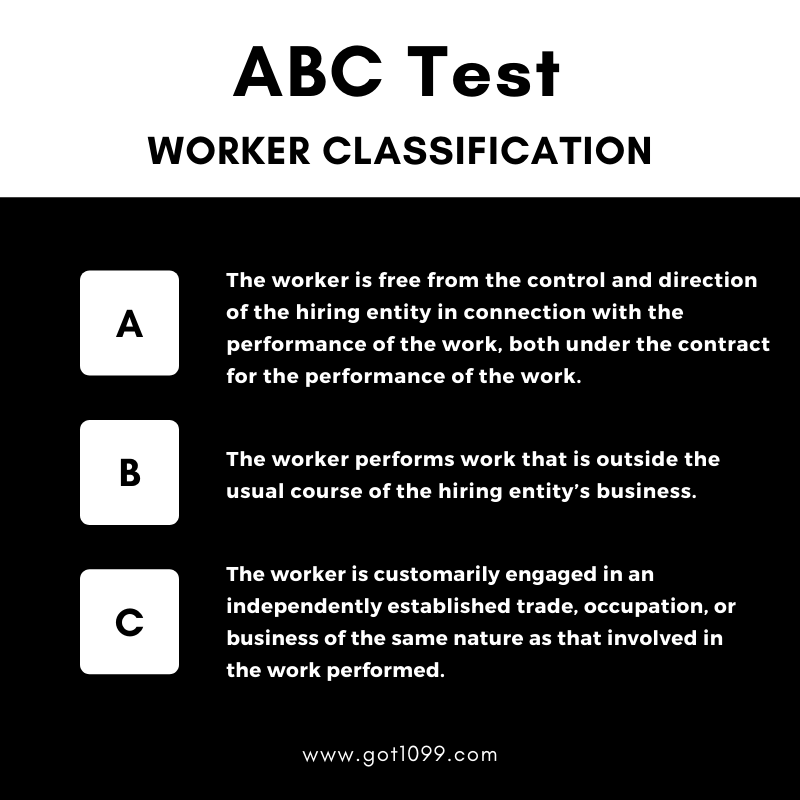 Borello vs. ABCs of Contractor Classification

How to Hire an Independent Contractor
Scroll to top