Watch our video below for a full explanation:

The important aspect of this proposition was that under AB-5 and the new ABCs of contractor classification, any worker who was exempt from the 3-factor test then had to pass the old 13 factor Borello test.  However, after Prop 22, all rideshare drivers are made totally exempt from any classification criteria and are automatically classified as 1099 contractors.

Prop 22 is currently being challenged having been overturned as unconstitutional by the California Supreme Court because it tied the hands of future legislatures. Future CA Supreme Court litigations will determine whether Proposition 22 will return into force.  The question remains, what is the classification for rideshare drivers in the meantime?

The reason for the Supreme Court decision on Proposition 22 is based on a constitutional argument surrounding the proposition. The State of California argues that Prop 22, which was passed by voters, took away the power for the State of California to regulate workers, the safety of the workers, and whether the workers really should be classified as employees. Learn more about why Prop 22 was overturned by the the California Supreme court here.

What Does Prop 22 Mean for My Business?

With Prop 22 potentially inspiring changes in worker classification on a federal level, many government agencies are looking at worker classification closely. This means that no matter what state you’re in, a government agency can analyze your workers and potentially—if you have misclassified workers—assess additional payroll taxes, penalties, fines, and interest. If you have a company that hires independent contractors, analyze them very carefully to make sure they are classified correctly.

If your company is audited by the State of California, typically by the Employment Development Department (EDD) in this case, they could apply two different factors.

What is the Borello Test?

The 13 Factor Borello Test classified workers as employees or independent contractors before AB-5 passed. It provides less clarity than the ABC test. Currently, if the worker is an exempt AB-5 business, the Borello test is still used to determine classification. The test asks the following questions:

AB-5 is the abbreviation for Assembly Bill five, which was written by Lorena Gonzalez and went into January 1st, 2020.  The goal of the bill is to protect workers from predatory employers who try to skimp on workers’ compensation, benefits, and other protections employees receive by classifying their workers as contractors.

In practice, the law prevents many gig workers from remaining in their chosen classification because they lack all of the elements necessary to qualify as an independent contractor.

What is the ABC Test?

The ABC test is a three-part test, A, B, and C that differentiates employees from independent contractors. A worker is automatically considered an employee unless they meet all three of the following criteria.

The first section, part A, explains that the hiring company cannot have control over the worker. Control comes in many forms. It could be requiring the worker to report daily, weekly, on the status of the work. It can require them to wear a name badge, a uniform, or anything that shows control over how the worker performs their work.

Part B examines the services performed by the contractor or worker. It also looks at what the hiring company does. Is the work the new worker will do the same as the company’s core business?

Part C of the ABC classification criteria examines whether the worker has an independent trade or business. Does the worker advertise? Do they invest in their business equipment? In the plumbing example, the contracted plumber will have their own tools and equipment, not provided by the hiring company as well as a website, other clients, a business license, a tax ID, and professional licenses as needed.

At its core, the law is looking to determine whether a worker has a real independent business, and not simply that they’re only performing work for one company and being denied protections and benefits.

What is a got1099 Report for your Independent Contractor?

A got1099 report helps your business be sure about the classification of your workers.  The report verifies that your independent contractors have a valid license, business entity and that their licenses are not expired or suspended/ revoked.  In cases where the worker does not meet the criteria for being classified as a 1099, there are options an employer can take.

Contact our team today to learn more about 1099 worker classification. 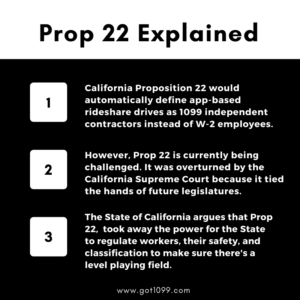 Borello vs. ABCs of Contractor Classification
Scroll to top

This site uses cookies. By continuing to browse the site, you are agreeing to our use of cookies.

We may request cookies to be set on your device. We use cookies to let us know when you visit our websites, how you interact with us, to enrich your user experience, and to customize your relationship with our website.

Click on the different category headings to find out more. You can also change some of your preferences. Note that blocking some types of cookies may impact your experience on our websites and the services we are able to offer.

These cookies are strictly necessary to provide you with services available through our website and to use some of its features.

Because these cookies are strictly necessary to deliver the website, refusing them will have impact how our site functions. You always can block or delete cookies by changing your browser settings and force blocking all cookies on this website. But this will always prompt you to accept/refuse cookies when revisiting our site.

We fully respect if you want to refuse cookies but to avoid asking you again and again kindly allow us to store a cookie for that. You are free to opt out any time or opt in for other cookies to get a better experience. If you refuse cookies we will remove all set cookies in our domain.

We provide you with a list of stored cookies on your computer in our domain so you can check what we stored. Due to security reasons we are not able to show or modify cookies from other domains. You can check these in your browser security settings.

These cookies collect information that is used either in aggregate form to help us understand how our website is being used or how effective our marketing campaigns are, or to help us customize our website and application for you in order to enhance your experience.

If you do not want that we track your visit to our site you can disable tracking in your browser here:

We also use different external services like Google Webfonts, Google Maps, and external Video providers. Since these providers may collect personal data like your IP address we allow you to block them here. Please be aware that this might heavily reduce the functionality and appearance of our site. Changes will take effect once you reload the page.

The following cookies are also needed - You can choose if you want to allow them: